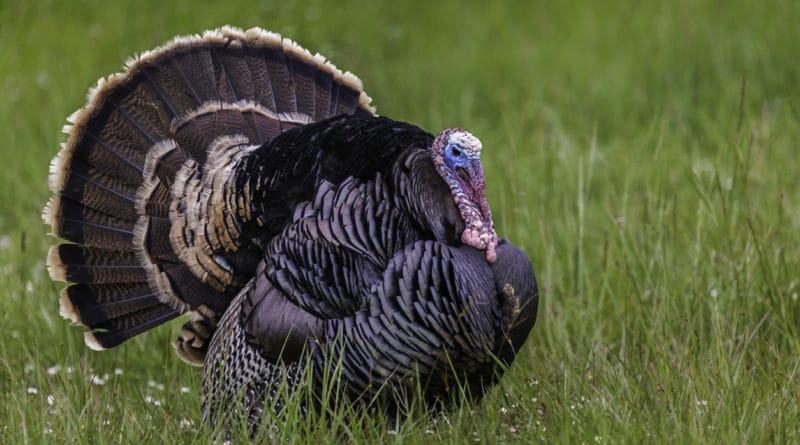 From what I can remember from English Literature class, the three most common types of conflict in stories are Man vs. Man, Man vs. Himself, and Man vs. Nature. My first South Dakota Turkey hunt was a Man vs. Nature story. To be specific, Man vs. Turkey.

It all started out pleasant enough. Good friends, Tony Treml, Doug McDougal, Jeff Boehler, and I loaded our gear in my four-door Ford truck and we headed west from Minnetonka, Minnesota towards the Black Hills to chase Merriam’s Turkeys. The plan was to drive out to Rapid City, South Dakota and rent a pull behind camper that we would use to camp in the Black Hills.

We drove west through the heart of pheasant country and ultimately arrived in Rapid City to pick up an old rental camper. After breakfast on the edge of the Black Hills, we made the final push to our camping spot where we met our friends the Krahn brothers, Gordy and Tony. The Krahns were finishing up their turkey hunt, and then they were headed to Deadwood to play cards like a couple of old-time cowboys. I drove around with Gordy as he shared some spots where they had been seeing birds. It was dry, hot, and dusty in the hills, but despite the dry conditions, it was utterly spectacular scenery. After getting our bearings, we finished setting up camp, donned our camo, split up, and began hunting.

We started our hunt that afternoon with high hopes. We worked the areas that the Krahn boys had told us about and many others. During the first two days of hunting, I heard zero gobbles and only saw one bird off in the distance, but I couldn’t close the gap for a shot. The others weren’t having any better luck. Lots of boot leather was expended. Our group had trekked for miles around our camp, but there were no gobbles and no turkeys. Our group returned to camp after the morning hunt of the third day. We were all hot, dusty, and tired. We had our boots off and were resting in our camp chairs. Doug had stripped down to his skivvies to cool down. As Doug exited the camper he let the screen door slam behind him. The slam of the screen door was answered with – Gobble – Gobble – Gobble!

We looked at each other in disbelief! We all paused for a second, in shock that we trekked all over creation for days with no luck, only to have a tom turkey shock-gobble to a screen door slam thirty yards away from our camper. After we broke eye contact, it was like a chaotic fire drill as we scrambled to get boots on and grab our guns. We fanned out like Seal Team operators in pursuit of the turkey.

After a brief stalk, I had a shot at the turkey, I shouldered my gun and fired. He was hit but not well. The turkey trucked down into a big ravine that was north of our camp. Doug stood out on a large rock outcropping, still dressed in his boxers and hunting boots, and pointed the way to the bird like he was Sacagawea. Jeff and I gave pursuit down the rocky ravine.

As Jeff and I picked our way through the ravine, we would occasionally look back to Doug for directional hand signals. We flushed the bird three times as he led us farther and farther down the ravine. Finally, after more than a mile of hiking in pursuit of the bird, Jeff pointed to a fallen log. “He’s under there,” Jeff whispered, “You should grab him and pull him out.” I crept up to the log, crouched down and peered underneath to see the turkey staring back at me.

In hindsight, the wise thing to do would have been to just shoot him in the head and be done with it, but that wisdom hadn’t occurred to me at the time. Assuming I could wring its neck like a pheasant, I took Jeff’s dubious advice. I crouched down and formed my hand as if I were going to grab a venomous snake. After building a little resolve, I quickly darted my hand in. I grabbed the turkey by the neck and hauled him out.

It turns out my turkey was still very much alive. His wings were flapping and his spurs were raking my chest. I was amazed at the sheer strength of a 20-pound bird! My grip held and the only thing I could think of to do was repeatedly punch him in the head while I held his neck. The battle continued, and Jeff was doubled over laughing at my situation. He composed himself enough to offer, “Hit him with a rock!” I did, and I finally dispatched my bird. Jeff was out of breath from laughing.

We made the long hike back to camp with my hard-won turkey over my shoulder. Jeff shared our tale with Doug and Tony and remarked that for a while it wasn’t clear if I or the turkey was going to come out on top of the struggle. After my turkey battle, our group’s luck changed, and Doug, Tony, and Jeff all went on to kill turkeys. It turned out to be a great hunt.

I’ve learned a lot about turkeys and turkey hunting since my first inept Black Hills turkey hunt. It wasn’t a classic hunt where the tom comes strutting into your call. My hunt was a turkey hunting fiasco that was marked with my poor shooting and a subsequent melee. The interesting thing is, I’ve killed a lot of turkeys in a much more elegant fashion since then, but this first Black Hills hunt remains one of my most memorable hunts. It turns out the fiascos and the mishaps in life make the best stories.