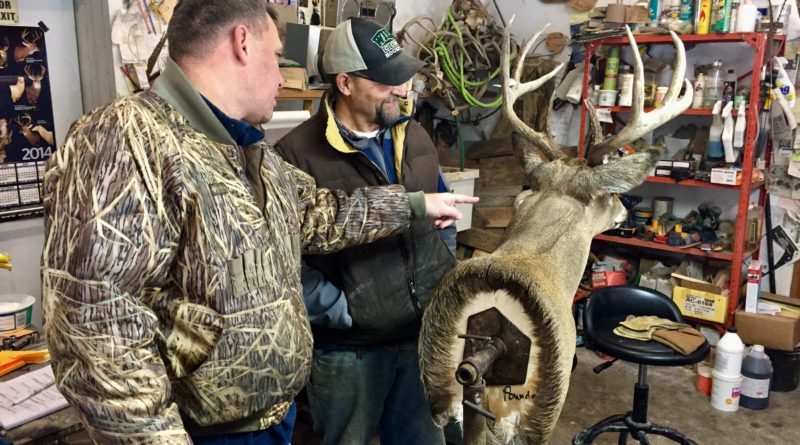 Some hunts can only be described as the stuff of magic. A good taxidermist can capture a piece of that magic and help you relive it for years to come.

Plan for your Trophy

We spend a lot of time thinking about our hunts. There’s researching and planning out all the gear we need. We need to practice our shooting and calling. Then there’s working out to get in shape to run up and down mountains. Many of us plan out every conceivable detail about our hunts, except we forget one big one. What are we going to do if we take a trophy animal? How are we going to care for it in the field? Safely transport it home? Who’s going to mount it? These are important considerations to plan out before you take the shot.

Meet Jim Manuel, from Jim’s Lake Land Taxidermy. Jim has been a full-time professional taxidermist since 1981. It shows, he’s really, really good. Jim specializes in North American and African mammals, birds and fish.  He does traditional fish, birds, shoulder, pedestal, full body and European mounts as well as habitat dioramas and custom one of a kind designs.

Jim’s attention to detail borders on fanatical and his commitment to quality is evidenced by the fact that he trusts no one. It’s not uncommon to think you’ve hired the “A” team and then you find out that the “C” team is really doing the work. Not with Jim. He is the only person who will touch your trophy, he doesn’t use any subcontractors, skinners, capers, apprentices or helpers of any kind who will “assist” on your mount.

It clearly shows in the creativity and quality of Jim’s finished pieces. He is a true artist. On a snowy February day, I paid Jim a visit to pick up my whitetail mount and I had the opportunity to ask him a few questions.

Pro Tip: If you want to make a full shoulder mount, do not cut open the chest cavity when you’re field dressing your trophy.

HT: So Jim, how long have you been a taxidermist?

Jim: I’ve been full-time since 1981. I went to college and all that good stuff like you’re supposed to, I started doing taxidermy on the side and it just developed into a full-time business.

HT: So a guy shoots a big deer, he’s never mounted anything before. What does he want to look for in a taxidermist? How do you find someone to trust with your trophy?

Jim: The key is to look at their work and ask questions.  How do they go about the mechanics of a mounting a deer head? What kind of materials are used? What’s their attention to detail look like?

HT: What are some of the things that guys do to screw up their trophy in the field?

Jim: Other than letting their trophy spoil so the hair starts to pull away, there’s not a lot that I can’t fix. I commonly fix bullet holes or cuts in the neck from caping.

Pro Tip: Leave way more hide than you think you need to when you’re caping your animal. It’s better to have extra than not enough. Every taxidermist has a preferred method of caping a hide. Contact your taxidermist prior to your hunt in order to get instructions on their caping requirements.

HT: How about transporting game. Some states do not allow you to bring the skull back out of fear for CWD. How should you learn to fully cape the animal?

Jim: It’s certainly a learned thing. It’s not the end of the world if you mess up, but the biggest problems I find are the cuts around the eyes. Just take your time. There’s also a lot of good videos available on Youtube. I recommend that guys practice on a doe they shot back home before attempting to cape their trophy elk.

HT: Is there anything that you wish guys would not do with their trophy?

Jim: It’s not good if they salt something hasn’t been properly fleshed. That makes a mess.

Caring for your Mount

HT: After you bring your new mount home. what should people do to care for it and make it last?

Jim: The biggest thing is you don’t want to do is hang it in direct sunlight. It’s going to quickly fade and dry out. Keeping it out of direct sunlight will help keep it stable and there shouldn’t be any shrinkage or cracking or any of that stuff going on. Beyond that give it a careful dusting periodically.

What makes a great trophy?

Jim: A trophy is in the eye of the beholder. A good trophy is anything that has meaning to you. Everybody has their own guidelines as far as what is meaningful to them and what they want to have their house. I love it when someone brings in their grandfather’s old mount for me to clean it up for them, it clearly has meaning to them.