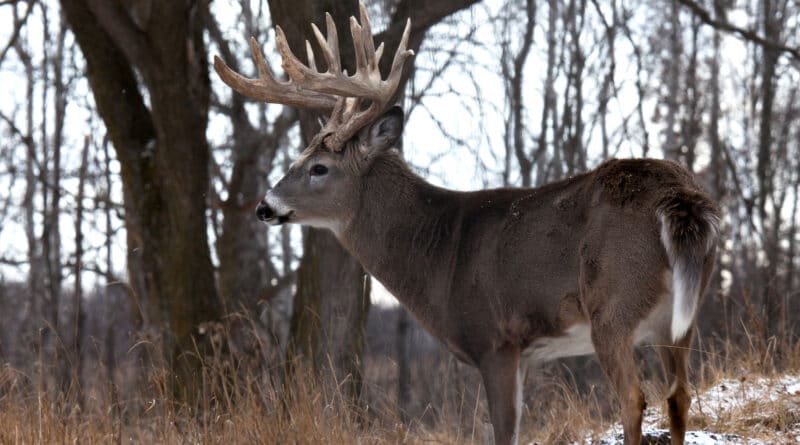 The whitetail deer is America’s number one big-game animal. Approximately 11 million hunters harvest of about 6 million deer each year. People who hunt nothing else, don blaze orange each season and enter the deer woods with Grandpa’s rifle in hand.  I wrote my eighth-grade research paper on the white-tailed deer, (the Odocoileus Virginianus if you want their scientific name) and I’ve basically been in love with deer hunting ever since. Deer hunting, more than any other form of hunting that I do is just as much about family, traditions and seeing people that I only see once a year as it is about hunting. While there are many ways to hunt whitetail deer, the most common method is to hunt from a deer stand. HuntTested’s Ultimate Deer Hunting Gear List is designed around the gear you need for a classic stand-style hunt for a whitetail deer.

I primarily deer hunt in central Minnesota, it’s a slug zone. When I was a kid, most of our group had smoothbore slug barrels and a few just shot slugs from their bird barrel, which much beyond 30 yards was crapshoot accuracy. These were the days of the big pumpkin ball style rifled slugs. When I started deer hunting, no one had a scope on their shotgun. Anything over 75 yards was a poke for the smoothbore slug barrels. Oh, how times have changed.

Today we all shoot purpose-built deer shotguns, with rifled barrels, quality Leupold scopes and modern sabot slugs, the combination makes for extremely accurate shots out to 150 yards. All the major manufacturers produce quality deer guns with rifled barrels designed to accurately shoot sabot slugs. My preference is Browning. I own a Browning A-Bolt shotgun which is in my opinion the best deer shotgun made, and I have a Browning BPS Deer Special with a cantilever scope mount, which I find is the ideal for hunting the timber of southern Iowa.

As we think about deer rifles they tend to fall into a couple of categories. If you’re in the north woods of Minnesota or Wisconsin, I prefer a fast shooting gun like the Remington 7600 pump rifle or the Browning BLR lever action. If your deer hunting takes you to a more open territory, the bolt action is king. Great examples would include the Winchester Model 70, the Kimber Montana, the Browning A-Bolt or their new X-Bolt. Popular calibers include .270, .308 and 30-06.

I remember being cold a lot while deer hunting when I was a kid. Today, I have better gear and know-how to dress to be comfortable in any weather. Here’s what I typically wear:

I store all my deer hunting gear and clothing in two Plano Sportsman Trunks. It makes packing really easy each year.

I typically use three different types of deer hunting boots depending on conditions.

Here are the items that I typically carry in my day pack:

Here are some of the items that like to keep in my truck on deer hunts:

This was a gear list detailing all you’ll need for a stand hunt in the northern part of the country. Your location and hunting style will likely require slightly different gear and clothing. Good hunting!