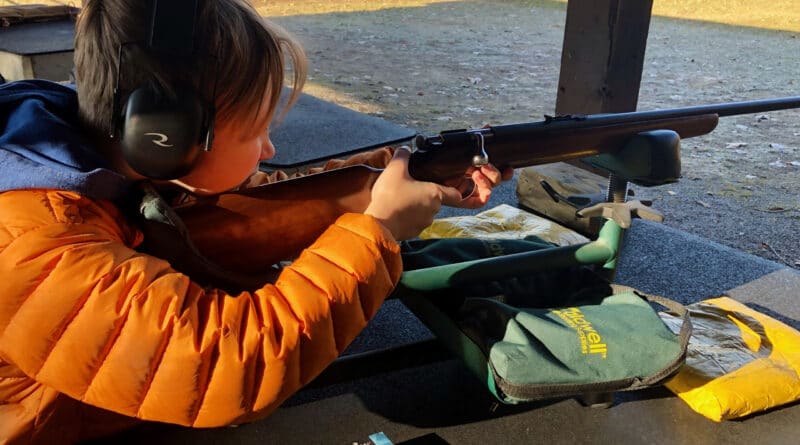 It’s been decades since my dad taught me these principles. And, later as an adult, I went on to teach others as a Firearm’s Safety Instructor. These gun safety principles hold up just as well today, as when they were first written. If you’re new to hunting, or it’s been a while since you reviewed these rules, you would do well to commit them to memory and practice them to keep yourself and those around you safe.

The 10 Commandments of Gun Safety

1. Watch the muzzle! Keep it pointed in a safe direction at all times.

Whether you’re actively hunting or back at your vehicle, you have a responsibility to always be mindful of where the muzzle of your gun is pointed. The firearms expert, and Founder of Gunsite Academy, Jeff Cooper, coined a simple rule, “Never let the muzzle cover anything you are not willing to destroy.”

2. Treat every firearm with the respect of a loaded gun. It might be loaded, even if you think it isn’t.

Cooper’s simple rule here is, “All guns are always loaded.” I tell people to never take anyone’s word for the loaded or not loaded status of a gun. Always check for yourself. Once you’ve confirmed that the gun is unloaded, still treat it like it is.

3. Be sure of the target and what is in front of it and beyond it. Know the identifying features of the game you hunt. Make sure you have an adequate backstop — don’t shoot at a flat, hard surface or at water.

My dad had great training for me on rule number three. We would walk through our woods when I was a boy and he would stop me, point in a direction, and say, “A nice buck just walked out right there, can you shoot?” I then had to immediately answer whether it was safe, or not, to make the shot and explain my rationale for the choice. This situational training taught me to always be aware of my environment and whether or not it is safe to shoot.

Additional to this gun safety rule is to be sure of your target. Every year we hear of hunting accidents where someone shot at movement thinking it was a deer or turkey and it was actually another hunter. If you cannot clearly identify exactly what you’re shooting at, don’t shoot. Never shoot at movement!

“Never let the muzzle cover anything you are not willing to destroy.”

4. Keep your finger outside the trigger guard until you are ready to shoot. This is the best way to prevent an accidental discharge.

This gun safety rule should be obvious, but you must make it a habit to keep your finger away from the trigger until you are completely ready to shoot. A good habit is to have your trigger finger extended and resting in a consistent position on the receiver, or on the outside of your trigger guard. The safety mechanism of your gun should also always be engaged until you are ready to shoot.

5. Check your barrel and ammunition. Make sure the barrel and action are clear of obstructions and carry only the proper ammunition for your firearm.

A small amount of mud or even snow in the muzzle of your gun can create backpressure and a dangerous explosion when you shoot. I’ve seen shotgun barrels that have peeled back like a banana. This creates a risk of serious injury or even death for the shooter. If you’ve tripped or if your muzzle came anywhere close to the ground, stop. Unload your gun and inspect that the muzzle is clear. Putting a 20 gauge shell in a 12 gauge shotgun, followed by a 12 gauge shell can be equally, or more, dangerous.

6. Unload firearms when not in use. Leave actions open, and carry firearms in cases, and unloaded to and from your shooting location.

This gun safety rule is pretty self-evident, but it’s an important one. Make it a habit to triple-check that your firearm is completely unloaded before casing it and putting it in your vehicle.

7. Point a firearm only at something you intend to shoot. Avoid all horseplay with a gun.

With guns there is no margin for error, there are no do-overs. If you’re screwing around and make a dumb mistake it can be fatal for you or someone you’re near. Don’t do it.

8. Don’t run, jump, or climb with a loaded firearm. Unload a firearm before you climb a fence or tree, or jump a ditch. Pull a firearm toward you by the butt, not the muzzle.

Gun safety to a large degree is about being in control. Anything that reduces the degree of control you have over your firearm introduces a risk for an accident. Take the extra moment to cross the fence safely, resist the urge to break into a sprint to catch up to your dog who is giving chase to a rooster. In general, slow down and maintain control at all times.

9. Store firearms and ammunition separately and safely. Store in secure locations beyond the reach of children and careless adults.

When I was a kid, I had a gun rack in my bedroom with my guns on display. The world has changed and unfortunately, displaying your guns in a nice wooden gun rack is no longer a good idea. The best bet is a quality gun safe that will protect your guns from theft and fire, but most importantly, keep them out of the hands of kids or adults who should not have access. If you don’t have a gun safe, at a minimum use some form of trigger locking device on each of your guns.

10. Avoid alcoholic beverages before and during shooting. Also, avoid mind- or behavior-altering medicines or drugs.

I enjoy a fine India Pale Ale as much as the next guy, but when it comes to guns I have a zero-tolerance rule. Zero beer, alcohol (or whatever your thing is – I’m looking at you Colorado!), until the guns are cased and put away for the day.

We each need to be personally accountable for the awesome responsibility of being safe with firearms. We need to be constantly mindful of safe behaviors and not let our guard down. It only takes a momentary lapse in judgment for a tragedy to happen. Be safe out there and model safe behavior for the next generation.

Editors note: The core 10 Commandments content was copied from my Firearm Safety Training Manual. Authorship or copyright for credit was not available at this writing, but we are happy to provide proper attribution on discovery. All other content on the page is from HuntTested.com.